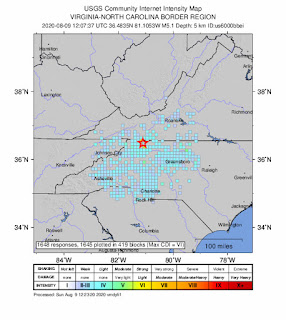 A 5.1 magnitude earthquake struck near Sparta, North Carolina Sunday morning at 8:07 am. Sparta is located near the Virginia border about 100 miles north of Charlotte.

Fun 101 sales manager Carl Pruett felt the quake at his home in Griffin as it shook the house for about 3 seconds and reports from thousands of callers to the U.S. Geological Survey throughout the Carolina's and Virginia have also reported feeling the largest quake to hit the area since 1916. No injuries have been reported but minor damage has occurred to homes and buildings near Sparta.

The USGS had reported five smaller quakes, all 2.6-magnitude or lower, near Sparta on Saturday and early Sunday and two from Seymour, Tennessee, last weekend.

A Lamar county deputy was shot Saturday night while answering a call in Milner.

A statement issued by the Lamar county Sheriff's office said that Deputy Justyn Weaver was on Moore street responding to a suspicious person call when the ambush style shooting occurred. The deputy was in the patrol car when the suspect came out of the woods firing a shotgun. Weaver was struck in the left arm with a birdshot load and had one pellet lodged under his right eye.

The deputy was airlifted to an Atlanta area hospital where he is expected to make a complete recovery.
Posted by Danny Bishop at 10:02 AM 0 comments

Georgia will travel to Arkansas to face Sam Pittman and the Hogs, Mississippi State will come to Athens to round out the 10 game SEC schedule just released by the conference.

The other two teams in the west will be Alabama and Auburn.

The east games will be as normal with Florida, South Carolina, Tennessee, Vanderbilt, Kentucky and Missouri.

Game dates will be announced later.
Posted by Danny Bishop at 6:13 PM 0 comments

The Southeastern Conference has announced its initial COVID-19 management requirements for the fall athletics season as recommended by the SEC’s Return to Activity and Medical Guidance Task Force.

A. Call Meeting to Order.

B. Adoption of Agenda.

The 91 deaths today are the highest recorded to date.

THE UPSON COUNTY BOARD OF COMMISSIONERS ARE ACCEPTING E-MAIL PUBLIC COMMENTS TO BE READ AT TUESDAY'S 6 PM MEETING ON YOUTUBE.

SEND COMMENTS TO COUNTY CLERK JESSICA JONES BY 5 PM MONDAY TO jjones@upsoncountyga.org.
Posted by WTGA AM & FM at 12:25 PM 0 comments

Mascots play an important role in an institution’s identity and have been known to change over time. As Gordon State College continues its story, a new ambassador and spirit mark were revealed Wednesday during the college’s Student Success Summit.

The primary GSC spirit mark logo includes a stag head with the Gordon State Highlanders wordmark and is symbolic of the institution’s history, steadfast reputation for excellence, inclusion and commitment. The circle G logo will be used for the academic face of the college.

Gordon’s full name and mascots may have changed over the years, but the institution’s characteristics and diverse culture have not changed. Before the 1980s, the athletic teams at Gordon were the Bulldogs. Through the mid-1980s, Gordon’s teams were known as the Generals and the Wolves. The teams became the Highlanders in 1995.

The incorporation of the stag head into the new spirit mark is symbolic of the badge worn by the Gordon Highlanders, who were a line infantry regiment of the British Army that existed for 113 years after two Scottish Regiments merged in 1881. A crest with a stag and the motto “Bydand,” which means “Stand and Fight,” was also a featured part of the badge.

“Gordon State College’s heritage continues to shine brightly as it maintains a strong connection to the past,” said President Kirk A Nooks. “Our new spirit mark and mascot will serve as a visual symbol of strength and pride for our college for many years to come.”

A series of informational meetings were conducted with the college community, including students, student athletes, faculty, staff, alumni, trustees and stakeholders with artist John Hartwell of Hartwell Studio Works in Atlanta to determine the need for the updated spirit mark.

Since May the college created a series of five videos to introduce the mascot, including a contest with each episode naming a winner for participant guesses. The overall winner will receive a basket of promotional items with the new spirit mark along and episode contest winners will receive a gift bag with spirit mark items.

The college has delegated the responsibility for all Gordon State College Spirit Mark related items to the GSC Marketing Department. The GSC Spirit Mark brand consists of the stag logo, stag mascot, the claymore, GSC ligature and all related graphic elements including the tartan plaid pattern. The Gordon tartan, a plaid combination of blue, green and gold, was worn by the Scottish regiment, which also carried a claymore (a sword at the center of the Gordon brand) conveying strength and ferocity. Never underestimate a Highlander.

The spirit mark represents Highlander Nation’s strength of character through grit, perseverance, determination, pride, loyalty, honor and excellence. The Harry the Highlander mascot may be reserved for special appearances such as Alumni Weekend.
Posted by WTGA AM & FM at 3:49 PM 0 comments

There have been 274 deaths statewide since August 1st.