The Beast Came In The Middle Of The Night

It was nine years ago this morning when what came to be one of the most devastating tornado outbreaks in U.S. history spread into north and central Georgia on April 27th and through the early morning hours of April 28th, 2011. There were a total of 15 tornadoes during the outbreak across our area.

After watching the storm system moving through Texas, Louisiana and Mississippi all day, I decided that someone needed to be on the air when the system moved into Georgia Wednesday night. Julie went to the station with me and we monitored the beast as it moved steadily our way. The fast moving supercells had crossed into Georgia from Alabama and were traveling at a speed of 65 miles per hour.

It was just before midnight when the first tornado touched down near Hollonville in Pike County, I opened the mic and gave the first warning as it headed northeast into the Sunnyside area just north of Griffin were Charlie Green, 54, of Griffin, and Jamie White of Thomaston were killed. The storm was on the ground for a distance of 20 miles. 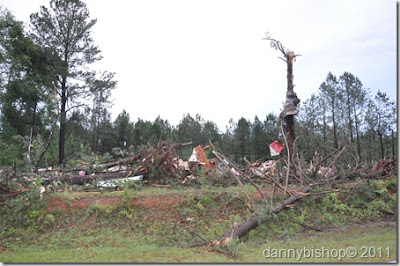 Moments after the first tornado touched down, a second twister dropped to the ground between Manchester and Warm Springs in Meriwether County damaging a school, a motel, a nursing home, several homes and 2 mobile home parks before crossing the Flint River into Upson County.

On Weems Road, one structure was completely destroyed and several others were damaged, utility poles were snapped like twigs and lines were down, the ragged spikes left as the trees broke about 15 feet above the ground clearly showed the path of the twister.


I was giving another warning as it took out the power lines on top of the mountain and knocked us off the air. Julie and I headed up to the tower to see if we could get the station back on, not knowing the amount of damage that had been done. The rain was more like a hurricane, it was raining sideways as we reached the top. The first house we could see was missing it's roof, trees and limbs were scattered everywhere.

Upson County was lucky, the storm intensified as it moved to the east.

In Lamar County the destruction was total, the county was in the process of determining how many homes were no longer habitable and how many were injured. Paul and Ellen Guntter of Grove Street were killed, three other family members were hospitalized.

Amazing stories of survival were around every corner, Frank Foster’s wife Sallie was helping care for an elderly friend leaving Frank home alone with their small dog. Just before 10 pm, Frank went to bed, he had seen the news from Alabama but thought that it was too far away to impact his life. 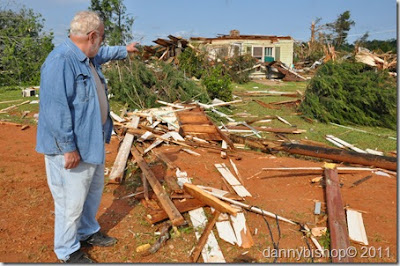 At 12:30 am, Frank was awakened by the sound of debris hitting the roof, a second later the roof was no longer there. His bedroom was located in the right front corner of the house, it’s the only part that remained standing.

Frank picked up their small dog, raised a window and stepped out onto his front porch. Amid all the devastation, his first thought was to call and make sure Sallie was alright. She answered the phone and thought Frank was just kidding when he said the house was gone.

When the sun rose Thursday morning, Frank was just thankful he was there to pick up the pieces. 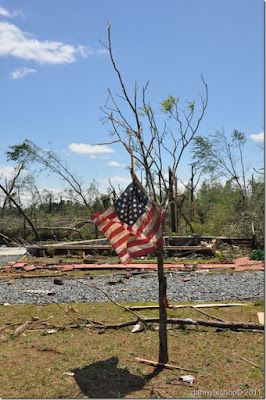 The amount of devastation that nature can inflict over the span of a few minutes is at times unbelievable and pictures don't always convey the full impact of what it's like to see peoples lives scattered across a field.

The National Weather Service officially rated the storm as an EF-3 although a small strip in Lamar county looked more like a 4. I received a call a few days later from the NWS asking if I would send them the pictures that I had taken to use in their final assessment.

The most memorable picture that I took that week was the foundation of a brick home that sat adjacent to the Guntter’s mobile home.

The occupants survived the storm.

The flag was put in the tree by the same wind that claimed two lives 50 feet away.
Posted by Danny Bishop at 11:18 AM