Miracle In The Oz House 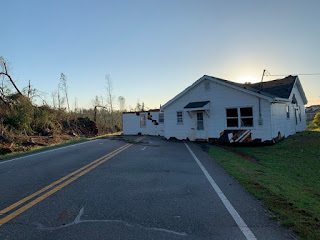 Just after 2 am on the Monday morning after Easter an EF-3 tornado tore a path of over 16 miles from south of Thomaston to the Lamar county line east of town.

Heriberto and Maria Moran had been told of the impending severe weather and had taken shelter at their daughter’s home at the intersection of The Rock Road and Highway 74, about a mile away. As they huddled in the basement the tornado picked up the home they had rented from Steve and Debra Daniel and dropped it into Highway 74.

The sun rose Monday morning with a clear sky and the Moran’s son-in-law Ronel Johnson, who is a supervisor with the Post Office, and his son Troy tried to recover as much as possible from the Moran’s home after a bulldozer was called in to move it off the roadway. Miraculously, Troy found an urn containing the ashes of his mother’s brother who had passed away last December in the rubble. The urn was in a closet in the house and had survived intact as the home was moved about fifty yards off it’s foundation and into the road.

The Moran’s lost most of their belongings to the storm and a Go Fund Me account has been established to help them recover. You can help by clicking the link below.