On Friday at approximately 6:45 am, a group of inmates in a housing unit at the Spalding County Detention Center began creating a disturbance, eventually barricading the entrance to the unit with metal bunk beds and attempted to block surveillance cameras. 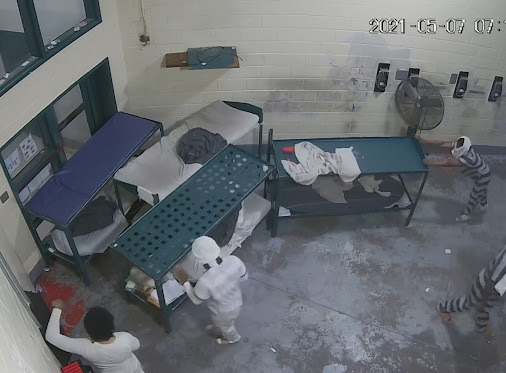 Sheriff Darrell Dix, “From the very beginning multiple attempts were made by our detention staff to de-escalate the situation including meeting face to face with the inmates. The inmates that were involved chose not to cooperate with those attempts and the situation began to slowly deteriorate. By 9:45 am, additional de-escalation attempts had been attempted but failed. Before the event could deteriorate any further, I made the decision to deploy the Spalding County Sheriff’s Office SWAT Team armed with various types of less-lethal weapons into the Unit. The SWAT team along with our K-9 Unit and Detention staff made entry, deployed a distraction device, and secured the unit without incident. All of the inmates immediately complied when entry was made. There were no further incidents and no uses of force.” 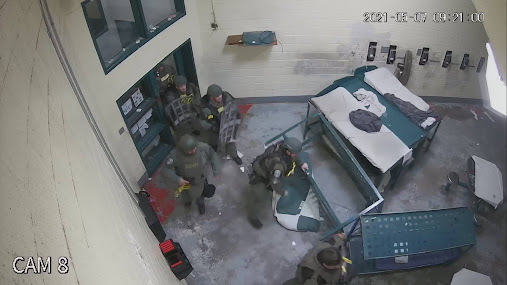 “The inmates that have been identified as instigating the event have been removed and placed in lockdown pending disciplinary charges and further criminal charges. We are continuing to review video to identify any others that may have been involved and determining the cause of the incident. Inmates housed in that unit that were not involved will remain there. The other inmates housed in the unit were put in a bad situation because of the behavior of a few instigators. Fortunately, no one was hurt, and the incident ended peacefully. Our SWAT Team and Detention staff did an outstanding job in responding to, attempting to de-escalate, and containing this incident before it got out hand. There could not have been a better outcome.”
Posted by WTGA AM & FM at 4:38 PM 0 comments

CONGRATULATIONS TO BARBIE PHILLIPS IN THE BOOKKEEPING DEPARTMENT OF UL HIGH SCHOOL, THE FUN 101 MOTHER OF THE YEAR AND SHE RECEIVES A BASKET OF GIFTS FROM AREA BUSINESSES.
BARBIE WAS NOMINATED BY HER SON COLBY AT THE U.S. AIR FORCE ACADEMY.
Posted by WTGA AM & FM at 4:21 PM 0 comments

THOMASTON'S CITY MANAGER RUSSELL THOMPSON WANTS CLARIFICATION ON A STORY WE AIRED ABOUT THE CITY COUNCIL REINSTATING THE POWER COST ADJUSTMENT MAY 4TH. THE MONTHLY BILL WILL INCREASE AN AVERAGE OF $4 BUT THE CITY MANAGER SAID ITS BASED ON USAGE SO SOME BILLS WILL BE LESS.

THE MANAGER TOLD COUNCIL AT LAST WEEK'S MEETING THE POWER COST ADJUSTMENT INCREASE IS AIMED AT PREVENTING FUTURE RATE HIKES, ITS DEDICATED TO THE COST OF CITY HALL'S INVESTMENT IN THE PLANT VOGLE NUCLEAR FACILITY NEAR AUGUSTA.
Posted by WTGA AM & FM at 2:00 PM 0 comments

GRIFFIN JUDICIAL CIRCUIT DISTRICT ATTORNEY MARIE BRODER REPORTS ON JURY TRIALS IN FAYETTE COUNTY. EUGENE MARTIN, AGE 35 OF ALBANY, WAS SENTENCED TO 30 YEARS WITH THE FIRST 15 TO BE SERVED IN PRISON BY SUPERIOR COURT JUDGE BEN J. MILLER JR. FOR ARMED ROBBERY/AGGRVATED BATTERY. HE ENTERED THE VICTORIA'S SECRET IN THE AVENUES SHOPPING CENTER , SPRAYED AN EMPLOYEE WITH PEPPER SPRAY AND STOLE OVER $2000 WORTH OF MERCHANDISE.

A JURY WAS EMPANELED BUT MARTIN DECIDED TO ENTER A PLEA TO THE CHARGES. HE HAD FOUR PRIOR FELONY CONVICTIONS.
Posted by WTGA AM & FM at 1:33 PM 0 comments 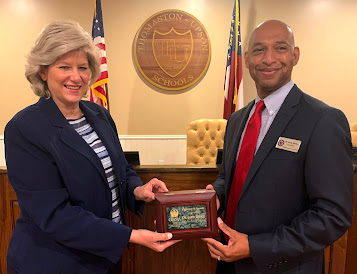 At the spring Bootstrap Conference in Savannah, Georgia, the Georgia School Superintendents Association (GSSA) recognized Dr. Larry Derico, the Superintendent of Thomaston-Upson County Schools, for the 2021 GSSA President’s Award.
This award is given to superintendents for outstanding leadership in their school systems and communities. Dr. Derico was nominated for the award by Dr. Stephanie Gordy, Executive Director of Griffin RESA. Dr. Derico has targeted three major goals in addition to student achievement and student success including school safety, literacy, and building positive relationships. He has realized significant accomplishments while pursuing these goals.

Other Noteworthy Accomplishments include:

Literacy: For Thomaston and Upson County, literacy is a community-wide challenge. Dr. Derico realized that he had to think outside the box to ensure that students had the support necessary to read commensurate with grade-level expectations. To help address this goal, Dr. Derico reached out to officials at Southern Crescent Technical College. Together, they created a mutually beneficial partnership that offers adult education classes to parents of Thomaston-Upson students during the school day on the campus of the Upson-Lee Learning Academy. In addition, the district invested in Wilson Reading Program professional training for every K-2 teacher and for select teachers in all other grades, along with increased professional learning for the district’s reading curriculum. By the end of the 2018-19 school year, ELA Milestones scores were beginning to show gains in third, fifth, sixth, seventh, and eighth grades, with fifth graders showing the greatest increases from 48.35 in 2018 to 57 in 2019. (Due to the pandemic, testing did not occur in 2020.)

Building Positive Relationships: Building positive relationships is a major component in Dr. Derico’s quest for excellence. His message to Thomaston-Upson faculty and staff at his very first back-to-school breakfast was this: “Success is important; but what’s more important is that you have built relationships, created lifelong bonds, blessed lives, and helped to make the world a better place.” On that first day of pre-planning, Dr. Derico challenged each Thomaston-Upson employee to build relationships and grow stronger bonds among colleagues, schools, students, families, and the community. He has continually modeled positive relationship building for the school district throughout his tenure at Thomaston-Upson Schools. He is frequently seen in the hallways and in the classrooms throughout the school district. He attends sporting events, fine arts events, and honors events. He serves as a VIP reader in the primary school. He and his family are active in the community. He knows the teachers, staff, students, their families, and community members, and they know him. His service is actively sought for community boards and committees.

John Zauner, the GSSA Executive Director had this to say: “Dr. Larry Derico is well deserving of the award noting that his leadership is very evident with the progress Thomaston-Upson School District is making. Emphasizing school safety, literacy, and his ability to build positive relationships has rocketed Dr. Derico to be highly respected by his peers and local community. He has started some very positive momentum for the greater Thomaston-Upson area.” Dr. Stephanie Gordy, Executive Director of Griffin RESA stated: “I am fortunate to have the honor and privilege of working with this exemplary school superintendent. Our entire region benefits from his exceptional leadership skills.
Posted by WTGA AM & FM at 1:14 PM 0 comments

Inmate Jason Goolsby walked off of a morning work detail today.
He was incarcerated for drug offenses.

Deputies are actively working to return Goolsby to jail.
Please contact 770-567-8431 if you have any information on his whereabouts.
Posted by WTGA AM & FM at 1:04 PM 0 comments